TALK TO US, WE ARE KINDA AWESOME

Harold Lempka opened Minden Machine Shop in 1984 when he and a business partner were looking for a way to make some extra money. Both had steady income from their regular jobs, but they wanted more. On the side, Harold had been working for his father-in-law’s well-drilling business, and he happened to have a building that wasn’t in use. Located on the northeast part of town, It contained an old lathe and welder, and they were allowed to use it. The business had begun in a 30 foot by 50 foot building along the railroad tracks that went through Minden.

Harold began repairing and building machinery. When they could afford it, they purchased more equipment they needed, such as a mill, more welders and lathes.

Word of their quality work and reasonable prices spread, and they soon had to quit their regular jobs and dedicate themselves full time to the machine shop. After a few years Harold’s partner was offered a lucrative job and wanted out. They divided the equipment and Harold was now on his own.

The two brothers decided that, in addition to repair work, they would manufacture farm equipment. They had paid attention to the things they were fixing and thought “we could build that better.” Specifically, agriculture equipment. The business took off.

They did business always keeping the philosophy their father set as an example: If you do a good job at a fair price, and treat your customer with respect, the business would thrive. And it did just that. In 1994 they branded the line of equipment they manufactured and sold as “Patriot Equipment” because of their deep sense of patriotism.

They moved to the current location in 1995 and in 2004 19 people worked at Patriot Equipment. In 2008 there were 30. Harold formally retired in 2007, yet continued to come in everyday to greet customers and play solitaire everyday until his passing in 2016.

Over the course of the past thirty years the business has grown; sometimes slowly, sometimes quickly, but always steadily. There are now more than 60 people working at Patriot Equipment.

What was once a business in a 30 foot by 50 foot building, grew to what is now in buildings that total more than 92,000 square feet. Patriot Equipment manufactures and sells 31 lines of equipment, of which each has several versions. Seed tenders alone have 10 different variations of size and style. We also still take in business as a Machine Shop doing repairs on equipment for farmers, companies, schools, hospitals, or anyone who comes in looking for help.

We appreciate doing business with you, and we thank you for your patronage of  Patriot Equipment. 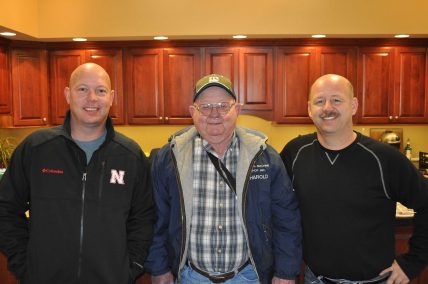